Practically all my personal experience speaking Cantonese has been in Hong Kong. And talking with Hong Kong friends, you would think that Hong Kong is basically the only place in the world that uses Cantonese. But the fact is, Hong Kong has only about 1/10 of the world’s Cantonese speakers. And Guangdong province has at least 2/3 of them! (Hence the common Chinese name for Cantonese, Guangdonghua.) 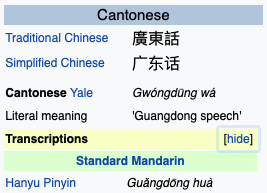 My 3-Day Trip To Guangzhou

I recently traveled from Hong Kong to Guangzhou. When I got across the border–but before officially stamping my passport to enter China–I heard an immigration official speaking Cantonese. That was a first. Maybe it’s normal, but I had never noticed it.

I walked to the train station and bought my ticket. I thought I would try using Cantonese–and I had no problem.

In Guangzhou, I talked with my taxi driver in Cantonese.

And at the hotel, I checked in using Cantonese.

I know this probably shouldn’t seem like a big deal. But the last time I took a trip to Guangzhou, I was not a Cantonese speaker. I knew a ton of words, I could make small talk, and my pronunciation was perfect. But to be blunt, I couldn’t speak Cantonese. Not really. Not in real life. So every time I crossed the border from Hong Kong into Shenzhen and the province of Guangdong, I transitioned to Mandarin, because it was just easier.

I’ll tell you what happened my second day at the hotel, because it dramatically shifted how I thought about Cantonese speakers in Mainland China.

I went downstairs to the hotel’s front desk, where they serve coffee to guests for free. It’s simple Americano, but it’s really good! (Long story short, my original hotel didn’t communicate clearly with hotels.com, and there was mix-up that took several hours to fix. But hotels.com was kind enough to put me in a much nicer hotel…I was impressed!)

After that, I showed them how I type Cantonese using Jyutping. The manager and her colleagues were fascinated that Cantonese could be typed phonetically.

Then the boss of the hotel came by. He was fascinated that a white guy was speaking Cantonese at all. So we started chatting, and he told the manager to give me a cup of his super fine coffee. (It was specialty coffee that probably cost 100 RMB per cup.)

The really fascinating thing about all this was that I’d always heard that young people in Mainland China had all switched to using Mandarin, unless they were speaking with their older relatives. I was finally seeing that this is not the case! 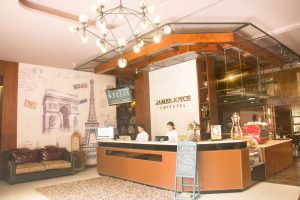 This is the check-in counter and coffee bar at one of the 208 branches of the James Joyce Coffetel. (By the way, I still have no idea how to pronounce Coffetel.)

We chatted about the hotel–the James Joyce Coffetel. I thought it was such a weird, niche idea for a random hotel. All the decorations were inspired by the famous author James Joyce. And they served coffee.

On one side of the lobby, there is a big dining area. And on the other side, there is a nice lounge area that had extremely tall bookshelves filled with books (most of the books are real!)

It was an interesting place, and definitely unique. But I was not prepared for him to tell me that the hotel had 208 branches. 208?!?

He showed me the founder’s WeChat account. It’s a Hong Kong guy who looks like a picture perfect family man with his wife and 3 kids. And he’s now also a massively successful business owner.

I couldn’t get over how weird a niche idea this was for a hotel chain. But in any case, it worked!

Cantonese Is Not Dying

Beyond all the interesting new stuff I learned about the hotel, what was most interesting about the conversation was that it took place entirely in Cantonese. I always had the feeling that people in Mainland China only spoke Mandarin, and that I would only hear it spoken by old people, or in villages. But that was not the case. I heard a lot of people speak Cantonese everywhere I went, including young people. And the hotel staff were in their 20s, 30s, and 40s.

When I was preparing to leave Hong Kong for this trip, I totally thought I would be switching to Mandarin, and that I simply wouldn’t be speaking Cantonese much at all for a few days. But I was totally wrong! Nearly everyone I met in Guangdong spoke Guangdonghua.